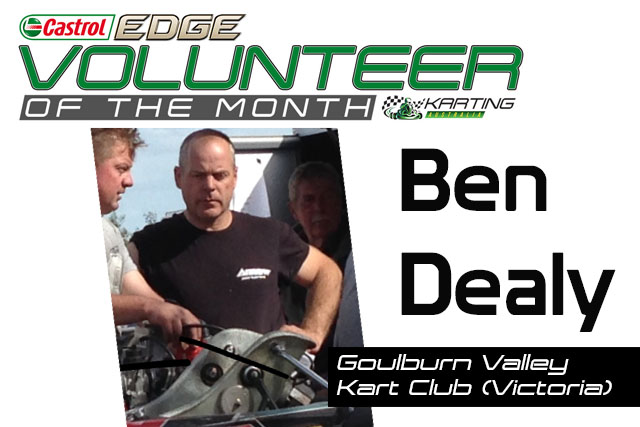 Goulburn Valley Kart Club Secretary Ben Dealy has reignited his passion for a sport that provided him with so much joy during his teenage years.

His dedication and commitment to the Goulburn Valley Kart Club over the past three years has seen him chosen as the Castrol EDGE Volunteer of the Month for December.

“It’s all about the culture. The Club is always number one, then the general racer and then the Superstars,” that’s his motto.

After seeing the Club almost ‘on its knees’ a few years ago, Ben has stepped into the Club headfirst and helped take it from a slender membership of 9 racing licence holders to now have 65. And it’s not going to stop there in his mind – 100 racing members is the next goal followed by 150.

“I saw the Club was on its knees, we got in there and made it what a Club should be – a community that works together towards a common goal,” said Ben.

“We all communicate together, there’s regular group texts that go out to the membership base and everyone is kept in the loop. There’s no arguing because everyone knows what is going on and they all feel a part of it.”

Ben’s ‘can do’ attitude has rubbed off on the entire Membership base with more people stepping up into different roles, and some of the top level drivers in the region even coming along to Club Days to help out.

The highlight of it all for Ben is seeing the joy that the sport provides for new Members.

Multiple Club Members nominated Ben for his commitment towards the 50-year old Club and his infectious attitude of ensuring that it grows to safeguard its survival for the next generation of racers, and the ones after that.

More than 150 nominations were received for the Castrol EDGE Volunteer of the Month in December.

Ben will receive a Castrol EDGE Merchandise pack as the Volunteer of the Month, and the Goulburn Valley Kart Club will also receive 20 prize packs for its use.

To nominate someone in your Club who you think deserves to be the Castrol EDGE Volunteer of the Month please click here.