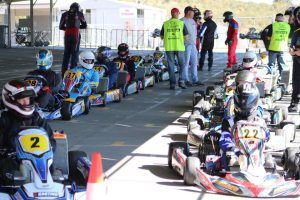 The Eastern Lions Kart Club has experienced strong growth over the past 12 months.

The Eastern Lions Kart Club in Victoria has been one of the best-performed Karting Clubs across the country over the past 12 months.

The number of Licence Holders in the Club has increased by 38% to exceed 230. In 2018, the average number of entries for the opening four Club Days of the year was 44. In 2019, their Club Days are averaging 79 entries – an impressive increase of 80% per event.

No matter which way you read the above statistics they are something that the Club can certainly be proud of. According to Club President Steve Pegg the increased membership and entries is the culmination of a number of factors – both internally and externally.

“As a Committee we recognised during the middle of last year that we needed to work hard on the culture of our Club and do a better job of being a ‘Club’ rather than just a place to race,” said Pegg.

“We’ve been very focused on being a family Club welcoming people and ensuring that it’s not all about the racing but also the relationships, friendships and family time off the track.

“There’s no magic wand that we’ve waved to generate an increase but it’s been about recognising some of the things that we could improve on and also having a positive outlook all throughout the Club. If a Committee is positive and takes pride in the Club, then it flows on down to all of the members.” 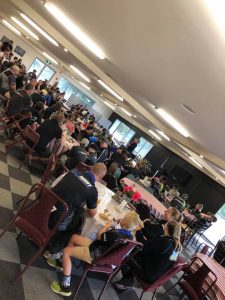 Inside the Eastern Lions Kart Club Clubrooms during a Club Day

Pegg and several of his Committee Members attended the Building Better Kart Clubs Conference last year in Melbourne – something he says they gained a lot from attending.

“The Building Better Kart Club Conference last year certainly opened our eyes to more opportunities. It made us think outside of what we were doing and more specifically look at where we could grow our membership base,” reflected Pegg.

“A couple of the key areas we identified was making people within the Club feel special, their birthdays or special occasions need to be recognised, and tapping into the local area. When looking at our membership base we noticed that we didn’t have anyone who was a member from Seymour (the town adjacent to the circuit). So we focused on getting people from the local area involved rather than just relying on karting people from Melbourne.
“All in all, we’re heading in the right direction but we’re not going to rest on our laurels – we need to build the best foundation we can to ensure this Club thrives for decades to come.”

If the past 12 months are anything to go by, the Eastern Lions Kart Club is well on its way to being a healthy Club for many years to come.

Information that may help your Club grow can be found on Karting Australia’s Building Better Kart Club’s website (www.buildingbetterkartclubs.com.au).