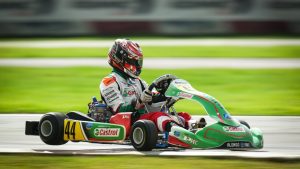 Matheus Morgatto on his way to victory in the FIA Karting World Championship – OK (Pic: KSP)

After a dominant performance during the heat races, Morgatto started the final from pole position and was never challenged on his way to victory.

Behind him, British driver Freddie Slater, reigning World Champion Tuuka Taponen, Japan’s Kean Nakamura-Berta and Swede Oscar Pedersen were dicing it out for the minor positions.

In the end, it was Morgatto who greeted the cheqeured flag more than two-seconds clear of Taponen.  Pederson claimed the final spot on the podium ahead of a hard charging Maksim Orlov and Slater.

Australian Jace Matthews showed good speed throughout the heat races but a pair of mechanic issues in two heats dropped him out of contention for a transfer into the final.  He would eventually be classified 69th.  An issue in qualifying put Harry Arnett on the back foot all weekend, as a result both he and Dante Vinci were unable to make the cut for the Super Heats.

In the Junior ranks, it was Thailand’s Enzo Tarnvanichkul who bounced back from a DNF in his final heat race and showed true determination in the final.  After starting fifth, he made the most of his opportunities and found his way to the front by mid-way through the 17-lap journey.

Hungary’s Adam Hideg got the better of a battle with Gerasim Skulanov to claim second place, the latter eventually dropping back to ninth after a penalty for incorrect front fairing position. After dropping back to 13th following an early race incident Polish driver Jan Przyrowski made a brilliant comeback with a strong pace, but was disappointed not to have been able to fight for the victory, and consoled himself by obtaining the third place in the Final classification.

Of the five-strong Australian junior contingent, only Toby Dvorak made the transfer into the Super Heat stage and he was classified 67th of the 111 drivers at the end of the weekend.

For the full results visit https://www.fiakarting.com/event/2022-sarno/guide