A trio of locals and some rapid Kiwis head into this weekend’s fourth round of the nationwide Rotax Pro Tour Series in Coffs Harbour as hot favourites.

Coffs Harbour Kart Club has three members in the capacity Rotax 125 Light field. Regular campaigner in the national series, Luke Collett will be joined by Jordan Matterson and Timothy Aebi in their quest for the top step of the podium. They will have to contend with round two winner – New Zealand-based female racer, Madeline Stewart who is looking to repeat the form that saw her take the win in Adelaide and maintain her top of the table points advantage. 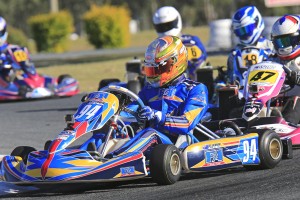 Last round winner, Victorian Bradley Jenner sits second on the points standings. The multi Australian Champion is aiming to continue his good form heading into Coffs Harbour and book his ticket to November’s Rotax World Finals – this year to be held in Portugal.The race between the younger competitors on the Rotax Pro Tour in Junior Max is heating up as well. Points leader – Tom Williamson Motorsport’s Jac Preston was fast during the course of testing at the tricky Coffs track, however he’ll have the likes of third round winner Harrison Hoey applying intense pressure.

The two-speed gearboxed DD2 category is one of the most hotly contested of the Rotax Pro Tour and New South Welshmen occupy the top four positions heading to Coffs Harbour – Canberra based Joshua Fife being pressured by Sydney-sider Joshua Car and Wollongong’s Cody Gillis. Kiwi traveller, Joshua Drysdale proved quick through testing, commenting that the track reminded him of the circuits back in New Zealand. 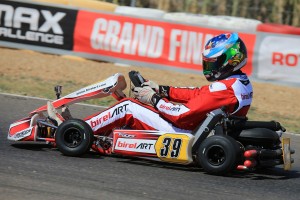 The DD2 Masters category for drivers over 32 years of age sees former V8 Supercar and Porsche Carrera Cup racer, Michael Patrizi make a rare return to the wheel. Patrizi is the co-founder and General Manager of Red Bull Racing Formula 1 ace, Daniel Ricciardo’s ‘Ricciardo Kart’ brand. He will be up against current points leader Troy Woolston and a trio of Queenslanders – Scott Howard, Kris Walton and Troy Bretherton – snapping at the Victorian’s heals for a slot in Team Australia.

Two fast female racers will be looking for strong results in the Junior Max Trophy category. Jacinta Hoey was fast at the previous round – looking to emulate her brother Harrison in the Junior Max category but poor luck befell her at critical moments, whilst Paige Raddatz is aiming for a strong result in New South Wales for the fourth round. The battle at the top of the points tree between Russell Mayo, Jonathon Marcusson and Angus Wallace will continue in Coffs as they race compete for the overall Series Prize at the end of the year. 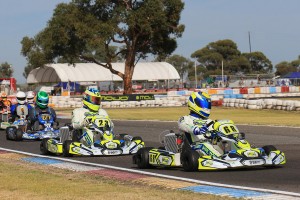 Kris Walton will be one of the favourites in Rotax Heavy (Pic: Coopers Photography)

In Mini Max, Victorian Shamick Racing driver, James Wharton has all but booked his trip to Portugal at the head of the points tree, but has a strong suit of drivers behind him looking to seize any opportunity open to them , none more so than Will Harper, Hugo Simpson and Hugh Barter.

In Micro Max – Jake Rutkowski is aiming to continue his table topping run aboard his EvoKart, however newcoming brothers Jaxson and Jenson Burns – sons of multiple Australian Champion, Jason Burns will be throwing out challenges for the podium.

In Rotax Heavy, the battle is expected to rage between former V8 Utes National Champion Kris Walton – who is doing double duty again over the weekend – and second placed man on the points ladder, Chris Farkas.

The action gets underway on Friday with practice and qualifying, racing Saturday and Finals on Sunday. Entry to the Coffs Harbour karting complex on Phil Hawthorne Drive is free. Follow the action live at www.rotax.com.au.