AUSTRALIA’S BEST ARE HEADING TO ADELAIDE 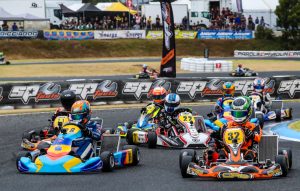 Drivers from all across the country will converge on the Bolivar Raceway next week. (Pic: Pace Images)

Australia’s highest level of kart racing, the SP Tools Australian Kart Championship presented by Castrol EDGE, makes a long-awaited return to Adelaide at the Bolivar Raceway in South Australia on April 30- May 2.

It is the first-time the venue has featured in the multi-round National Championship since 2014.  With close to 300 entries, it is also the largest event at the venue in almost two decades.

Along with drivers from all across Australia, also returning to the SP Tools Australian Kart Championship for the first time since the COVID Pandemic is New Zealand racer Josh Richmond after the corridor between Australia and New Zealand opened on Monday.

Southern Go-Kart Club President Brett Fortanier praised the hard work of the club’s committee and members over the last few years to catapult the club’s venue back onto the National Calendar.

“To host a round of the Australian Kart Championship is real honour for our Club, we’ve worked very hard over the past few years to continually improve our facility and we look forward to welcoming all of the teams, competitors and spectators next week,” said Fortanier.

“We recently held the annual City of Adelaide Titles, which was the most successful of recent years and allowed many of the travelling drivers to familiarise themselves with the circuit.

“An event like the AKC opens up a world of opportunities for us, it allows us to showcase our track to not only the competitors, teams and spectators that attend over the weekend, but also to the thousands of other spectators who tune into Karting Australia’s live streaming on Sunday.”

The event will feature drivers of a variety of ages across eight classes – from the youngsters aged between 7 and 9 years old in Cadet 9 through to the elite drivers in the KZ2 Gearbox category who will reach speed in excess of 130 km/h.

Practice gets underway on next Friday (April 30) from 8am ahead of qualifying and heat races on Saturday May 1. Sunday’s action gets underway at 8am with the last round of heat races before the finals begin at 11:30am.

Admission is free.  All attendees are required to check-in upon arrival at the venue.  Due to COVID-19 restrictions, spectators will be limited as a maximum of 1,000 people are permitted to be at the venue.

Sunday’s action will be streamed live across the internet via www.karting.net.au and the Australian Kart Championship Facebook Page.