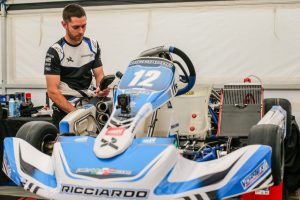 Close to 300 of the finest kart racers from the Asia Pacific region have assembled in Melbourne for the final round of the 2019 SP Tools Australian Kart Championship presented by Castrol EDGE.

Being contested at the Port Melbourne circuit, the Championship is the most prestigious in the region with drivers from all around Australia, New Zealand, Singapore and Sri Lanka competing.

In the elite KZ2 class, the title chase is set to go down to the wire as Troy Loeskow, Jason Faint and Chris Hays are set to battle it out to etch their name on the John Pizarro Perpetual Trophy.

Ricciardo Kart driver Loeskow holds a slender six point lead coming into the weekend, but with a career best finish of seventh he’ll need to make the most of his opportunities to hold Faint and Hays at bay.

Hays has the best record of the trio around the 960m undulating circuit with victories in 2012 and 2013 at the venue. 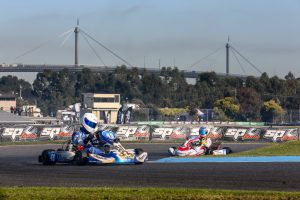 Queensland Luke Pink is on track to claim the title in the KA2 class (Pic: Pace Images)

In the elite Junior class – KA2 – Luke Pink has one hand on the number one plate with a 55-point advantage after the opening four rounds.  While there has been four different winners across the opening four rounds in the class, the Queenslander started the year with a maximum points haul at the opening round before consistency has kept him at the top of the standings.

The TaG 125 class looks certain to go down to the wire with five drivers all with a shot at the title.

In total, eight Champions across a variety of classes will be crowned at the conclusion of racing on Sunday afternoon ahead of a Gala Awards night at the Marvel Stadium on Sunday evening.

Results all throughout the weekend will be posted here https://speedhive.mylaps.com/Events/1717192

Sunday’s action will be live streamed across the internet on www.karting.net.au and the Australian Kart Championship Facebook page.