AUSTRALIAN KARTING SET TO CONTINUE TO BENEFIT FROM DEVELOPMENT FUND

Karting Australia Directors at the company’s November Board Meeting have confirmed the establishment of a National Infrastructure Development Fund (NIDF) to replace the former Track Development Fund.

Passing Bylaw B11 – the “National Infrastructure Development Fund” was the last step in the process of protecting karting’s most valuable national infrastructure funding instrumentality.

Karting Australia’s entire Federation – the Member States and Territory are united and resolute in their strong support that a nationally based infrastructure fund with objectives and principles similar to the original ‘Track Development Fund’ is an essential funding tool that must be maintained for the good of the sport.

“While fund records from 15-25 years ago are a little sketchy, what is clear, is that all Member States with their Clubs have borrowed more money for vital infrastructure work from the fund than has ever been contributed from their State. AKA Inc and now Karting Australia have made loans of more than two million dollars in that time.

“In business, when setbacks happen, its what you do next that matters. Our Board shares the view of the Members, and we are unanimous with them in deciding to do everything necessary to ensure the fund continues and that its ongoing operation is on a business-as-usual basis.

“That is why the Karting Australia Board has backed the plan by resolving that KA will pay the legal costs associated with the judgement and the appeal to ensure that there are ample funds available in the NIDF for ongoing loans to Member States and Clubs to be continued.” 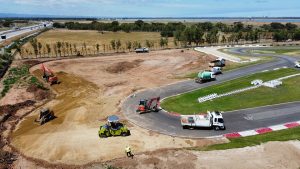 The first Club to benefit from the newly formed NIDF is the Southern Go-Kart Club in South Australia.

Some of the most recent Clubs that have benefited included the Oakleigh Go-Kart Racing Club and the Wimmera Kart Racing Club, both for completing a track extension and resurfacing.

The first Club to benefit from the newly formed NIDF is the Southern Go-Kart Club in South Australia.  The Board has approved a loan of $140,000 from the NIDF to enable the Club with additional funding by the South Australian Government to extend and resurface the Bolivar Raceway.

“Due to the hard work of previous and current Directors along with the excellent financial management by our CEO over the last nine years, Karting Australia is not only able to deal with this decision to support the Track Development Fund by paying for the legal defence but it will in no way affect Karting Australia’s plans to implement our growth strategies in full going forward,” said Davis.

“The board and senior management are fully focused on growing the sport along with our member states.  This focus includes welcoming the affiliation of Clubs who wish to receive the benefits under the Karting Australia structure.”

Further details on the NIDF can be found here.