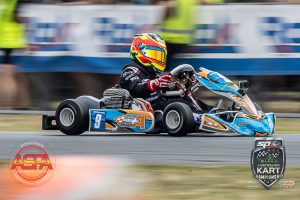 The 2021 SP Tools Australian Kart Championship, presented by Castrol EDGE has begun under lights in Ipswich with some spectacular racing to begin the Series.

A freak rain storm swept through midway through qualifying, however the majority of heat races were conducted on a dry race track.

Cadet 12 – held early in the heat race cycle – was the crossover category between wet and dry conditions and several drivers benefitted from gambling by starting on slick tyres over those who went the conservative wet tyre route.

Nobody benefitted more than Victorian, James Anagnostiadis – who qualified a lowly (by his standards) 23rd position. The second generation racer charged through to take victory on his dry tyres on the last lap of the race over another gambler in Lewis Cordato and early race leader, Lewis Francis.

Gold Coaster Jace Matthews has got his campaign underway in solid fashion, securing pole and the heat race win in the KA3 Senior category. Racing two events this weekend, he backed that up with a barnstorming finish in X30 charging from ninth on the grid to finish third.

Matthews crossed behind dominant leader and pole-sitter, Harrison Hoey who took a commanding win in X30 over New South Welshman, Jackson Souslin-Harlow – who spent much of 2020 competing in online racing and was featured in the Supercars eSeries.

Multiple Australian Champion, Brendan Nelson survived a late race surge from fellow Queenslander Ben Jurczak to get his TaG 125 campaign off to a flyer – scoring the maximum points from pole position and the heat race, with fellow Championship rival, Cody Brewczynski coming home in third in front of an impressive Christopher Williams.

The always exciting KA4 Junior class lived up to its swashbuckling reputation, with the 33 youngsters keen to get racing after so much time on the sidelines. Front row starter, Benjamin Munro took the heat win over pole-sitter Alex Ninovic and Ryan MacMillan.

In qualifying for both categories, held in wet conditions, Sydney-sider Jordan Shalala took his first KA2/AKC pole position, while Cody Gillis created history not just for himself but for Will Power Kart. Former DD2 Rotax Max Challenge Grand Final winner, Gillis taking his first ever KZ2 Pole Position – also being the first pole for the kart that bears the name of Australia’s only Indianapolis 500 winner and NTT INDYCAR Series front runner, Will Power.

Tomorrow, heat racing continues from 10am with the first heats for the elite Junior category, KA2 and the six-speed gearbox, KZ2.  The Ipswich Kart Circuit is located on Champions Way Willowbank (outside Ipswich), begins at 10am on Saturday, with finals starting just after 5:30pm.

Entry is free to the public.

Karting Australia is engaging in Covid-safe spectator distancing at the event.