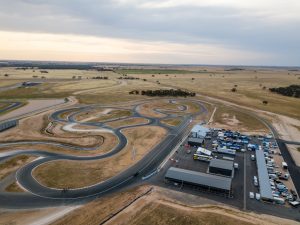 The Board of Karting Australia has confirmed that the season opener for the 2020 Australian Kart Championship presented by Castrol EDGE will be held at Australia’s newest karting facility – The Bend Motorsport Park in South Australia.

To be hosted by the Barossa Go-Kart Club, with the support of several other South Australian Clubs, the opening round will be contested on February 28-March 1.

“I’m very pleased to be able to host a round of Australia’s premier karting Championship and excited to work with the Barossa Go-Kart Club and the South Australian karting community to showcase the sport in SA,” said Dr Sam Shahin – The Bend Motorsport Park Managing Director.

“We recently held the Ultimate Club Racer event here at The Bend with great success, I look forward to being able to make the Australian Kart Championship a big winner for the sport as well.”

Karting Australia Chief Executive Officer Kelvin O’Reilly indicated that the initiative by the Barossa Go-Kart Club to work with other South Australian Clubs is what has allowed the Championship to head to The Bend Motorsport Park.

“The Bend kart track is a wonderful facility, but as far as the AKC is concerned, this has only been made possible by the Barossa Go Kart Club and some of the other smaller South Australian Clubs joining forces and partnering with The Bend’s management to open the 2020 AKC at Tailem Bend,” said Karting Australia CEO Kelvin O’Reilly.

For Barossa Go-Kart Club President John Ellis, the opportunity to host a round of the Australian Kart Championship is a significant step in the future of the Club.

“As a Club we can’t wait to be a part of the Australian Kart Championship and we hope that it will not only benefit us but also other Clubs, and the sport generally, here in South Australia,” said Ellis.

“It’s going to be undoubtedly the biggest event we’ve ever hosted as a Club but something that we are confident will be a significant success by working with other South Australian Clubs, the team at The Bend Motorsport Park and everyone at Karting Australia.”

One of the smaller South Australian Clubs that has already committed to be joining with the Barossa Go-Kart Club to combine resources is the Mount Gambier Kart Club.

“For our Club to have the opportunity to expose our Club Officials and Members to a National event while gaining valuable experience is something that I believe will be very beneficial,” said Mount Gambier Kart Club President Jason Fewins.

“By joining forces with Barossa, the event is also an opportunity for the financial benefits of hosting a round of the Australian Kart Championship to be spread wider throughout the State for the benefit of the sport generally in South Australia.”

Round Two will be hosted by the Eastern Lions Kart Club in Seymour, Victoria on April 17-19 before the Championship heads north to Ipswich in Queensland on June 19-21.

“Eastern Lions have been doing great things as a Club in recent times leading the way with the best membership growth in the country. It’s a great facility and it will be fantastic to bring the Championship back to central Victoria after an absence of several years. While a winter escape to Queensland for the southern competitors will no doubt be welcome when the Championship hits Queensland in mid-June,” said O’Reilly

The Newcastle Kart Racing Club will host the penultimate round in New South Wales on July 31-August 2 ahead of the Grand Final – which has been moved back a week to September 18-20 in Melbourne.

*Information correct at the time of publication but subject to change.