AUSTRALIAN KART CHAMPIONSHIP BATTLE TO HEAT UP IN SEYMOUR

Live streaming of the racing is available here www.watchmysportlive.tv 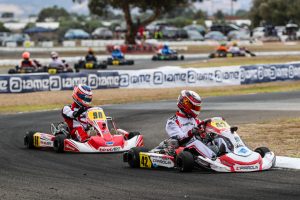 Jay Coul leading Henry Johnstone at the most recent round of the Championship in South Australia (Pic: Pace Images)

Despite the expected chilly conditions, the battle for the 2022 SP Tools Australian Kart Championship honours, presented by Castrol EDGE, will heat up at the Hume International Raceway near Seymour in Victoria this weekend.

It is the first time that the Eastern Lions Kart Club, the Club that was home to the likes of Supercar Champions Jamie Whincup and Craig Lowndes during their formative years, has hosted a round of the Championship since 2016.

The on-track action is expected to be scintillating – particularly in the elite KZ2 class where the title chase has been thrown wide open following the withdrawal of last round winner and Championship leader Cody Gillis.

With the New South Welshman electing to focus on future racing opportunities and nurturing his younger team-mates in the Tom Williamson Motorsport outfit, it leaves Parolin driver Jay Coul with the effective lead in the Championship.

In the elite Junior category – KA2, Melbourne teenager Lewis Francis holds a slender one-point lead ahead of New South Welshman Costa Toparis.  Francis is this weekend competing aboard a new Kosmic chassis for the first time.

Entering the midway point in the Championship, CXR Racing’s Jace Matthews is a clear leader in standings of the X30 class, however, there is a huge amount of talent ready to pounce led by Melbourne Kart Centre’s Brad Jenner.

Fresh from victory at the recent Victorian Kart Championship, Leigh Nicoloau will start as one of the favourites in the TaG 125 class.  He currently sits second in the Championship standings behind Zachary Heard. 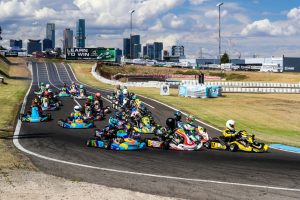 After winning the KA4 Junior title in 2021, Alex Ninovic has made a great start to his senior karting career to be leading the way in the KA3 Senior class enter this weekend.  With the likes of former Champions James Sera and Matthew McLean along with Jai Brown, Jace Matthews and last round winner Benito Montalbano in the field, Ninovic will face another tough test this weekend.

There have been five different winners in the previous five rounds of the KA4 Junior class, a trend that highlights the intense battles that will again be expected this weekend in the class.

In the Cadet 12 class the challenge is out to see who can stop the dominant run of Parolin driver Sebastien Eskandari-Morandi.  The Queenslander has won seven of the eight rounds that he has contested since making his debut in the Championship at the final round in 2020.  He currently holds a handy buffer atop the standings.

Cadet 9 Championship leader Cruz Kelly will make his debut aboard a Tecno Kart at this weekend’s event at the venue where he won the Victorian Kart Championship in April.

Practice and qualifying will be held on Friday aherad of the heat races on Saturday before the finals are contested on Sunday.

The circuit is located at 1005 Tooborac-Seymour Road, Hildene.  Admission is free for spectators.

Live streaming of the racing is available here www.watchmysportlive.tv