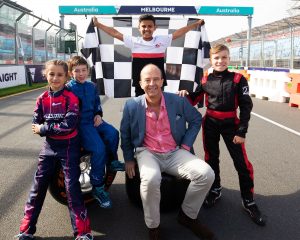 New Karting Australia Board Member Andrew Westacott (centre) is looking forward to building an even stronger sport at all levels for many years to come. (Pic: Getty Images)

With Andrew having led the Australian Grand Prix Corporation since 2011, his appointment to the Board further enhances the vast experience of the Directors tasked with guiding the sport into the future.  He is also a Graduate of the Australian Institute of Company Directors.

For Karting Australia Chairman, Mick Doohan, the skills, values and passion for the sport of karting that Andrew brings to the Board are exceptional.

“Andrew is a true leader for motor racing in this country and we’re delighted to have him as a Director on our Board for Karting Australia,” said Doohan.

“He brings with him a wealth of experience having been a driving force of the success of the Formula 1 Australian Grand Prix and Australian Motorcycle Grand Prix over the past decade, following a successful role with the 2006 Commonwealth Games in Melbourne.

“The addition of Andrew follows closely on the election of Kevin Davis as a Director at the Annual General Meeting and together they bring great management and entrepreneurial skills and strength to the Board.”

For Andrew, the sport of karting is something that he has become more passionate about over the past five years following the involvement of Karting Australia’s young drivers with the Formula 1 Australian Grand Prix.

“I’ve taken great delight in having the young karting kids as a part of the Formula 1 Grand Prix in Melbourne over the past five years.  It has provided me with great pride to see them grow and gain an insight into the great people that are involved in the sport,” said Westacott.

“It is for these reasons that I decided to pursue the opportunity to join the Board of Directors and look forward to building an even stronger sport at all levels for many years to come.”

Away from his role with the Australian Grand Prix Corporation, Westacott is a regular volunteer over summer at the Lorne Surf Life Saving Club and was previously a director of the Australian Motorsport Foundation (CAMS Foundation).