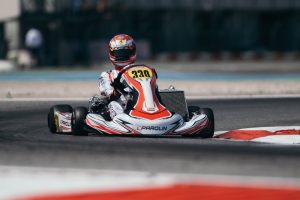 James Wharton will line up at the KZ2 International Super Cup in Sweden this weekend.

Victorian James Wharton will line up alongside 100 other racers from all over the world vying to be crowned the winner of the KZ2 International Super Cup when qualifying gets underway on Friday afternoon at the Kristianstad circuit in Sweden.

Wharton, who is supported by the Ferrari Driver Academy, is making his first attempt at the International SuperCup World Championship in the KZ2 class after being based in Italy for the past few years and competing with the Italian Parolin Factory Team.

The headline act for the event is the FIA Karting KZ World Championship where the likes of reigning Champion Jeremy Iglesias and 2019 Winner Marijn Kremers, who spent several years during his formative stages competing in Australia, will be amongst the favourites.

Two-time Race of Stars Champion Anthony Abbasse is making his return to the top level of karting with the Sodi Kart team and fresh from securing the European Championship, Riccardo Longhi will be among the title contenders alongside 2019 International KZ2 Supercup winner Émilien Denner.

This weekend’s event marks the return to karting for ex-Formula 1 driver Jaime Alguersuari, he finished ninth in the KZ World Championship in 2013.

Joining the programme at the Kristianstad circuit alongside the elite KZ and KZ2 competitors is the next generation of karting stars in the final round of FIA Karting Academy Trophy. Sri Lankan Yevan David, who spent several years competing in the Australian Kart Championship, finished on the podium in round two and will be one to watch in this weekend’s final round as he sets his sights on the top three overall in the standings.

Links to Information for the event can be found below: