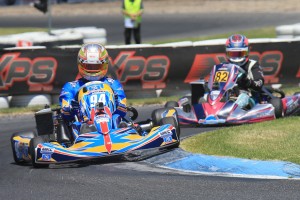 Brad Jenner was able to hold off a charging Madeline Stewart in a 3 lap dash to the finish (Pic: Coopers Photography)

Multiple Australian Champion, Brad Jenner has made a stunning return to the Rotax Pro Tour however was almost upstaged by young Kiwi lady racer, Madeline Stewart who pushed the Victorian the entire 22-lap distance.

Following yesterday’s three heat race wins and his victory in this morning’s Pre-Final, Jenner was an odds on favourite to take a commanding victory over the longer distance – however the inspired Kiwi had other ideas.The gap between the pair was no further than half a second for the entire distance and Stewart began closing on Jenner in the latter stages of the race before a full course caution to remove a stricken kart thwarted her charge, but established a thrilling three lap dash to the chequers.

Whilst Jenner got the jump, Stewart didn’t give up in her chase, however the momentum she had established prior to the caution was not as prevalent and Jenner – who made his racing return after a lengthy layoff due to an industrial accident last year – took victory. It was Stewart’s best ever Rotax Pro Tour result and Kosmic-mounted Pacific Kartsport driver, Troy Morrissey came home in third placing – a just reward after what had been a difficult weekend. 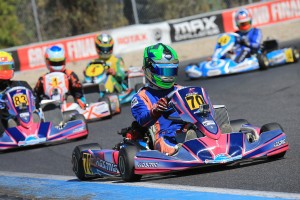 The DD2 final proved to be the race of the day with no less than eight karts in with a chance of taking the win. Canberra’s Joshua Fife led home his Tom Williamson Motorsport team-mate Cody Gillis and last year’s Series winner, Nathan Tigani. It was a race long battle that saw a number of drivers take to the lead – including CompKart’s Joshua Car. Yesterday’s lead man, Ryan Kennedy was shuffled back in the pack during the course of the Pre-Final and battled hard to get himself back up to fourth position, ensuring he has a strong haul of Rotax Rankings points after the implementation of the new system which awards points following the heat races and the final.

Continuing the tight finish theme in DD2, Daniel Richert took out DD2 Masters – leaving it until a handful of corners remaining to get around Troy Woolston – who led for the majority of the race – and the weekend. Woolston had been dominant in his DD2 Masters debut, but Richert timed his run perfectly to slice his Praga Kart up the inside of Woolston’s CompKart. The move was reminiscent of the last laps specials performed regularly by recently crowned DD2 Masters World Champion, Lee Mitchener – who was watching on with great interest. 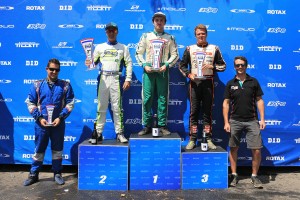 The Rotax Heavy Final proved to be a battle of wills and attrition also. After being very much the chaser throughout the weekend, Tony Kart’s Chris Farkas left his best to last moving into the lead and taking out the final. The battle – as it had been all weekend – was between Farkas, CompKart’s Kris Walton and Aaron Hindle. Walton and Hindle came together in controversial circumstances late in the race, thus pushing Hindle down the order. That was the catalyst for Farkas to open his lead and cross the line almost a second in front of Walton and with Lane Moore bringing his CRG home third.

Jaiden Pope took out the Junior Max final after a great battle all race long with Jay Hanson. Hanson – who has just stepped out of the sub-Junior categories was solid all weekend long and kept Pope honest. Pope used his experience to push forward in the closing stages and secure the win over Hanson – who can walk away incredibly encouraged by his weekend. Jac Preston brought his kart home in third placing getting his Rotax Pro Tour season off to a flying start, whilst Broc Feeney, Ryan Wood and Kade Vink also impressed getting themselves inside the top 10 after – at times – difficult stanzas to their weekend. 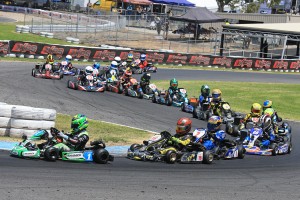 James Wharton took out the Mini Max final. Despite not losing the lead at any point during the final, Shamick Racing driver Wharton was pushed all the way by Jack Westbury – the Praga driver establishing the fastest lap of the race on the last lap. EVO Kart Sydney-sider, Adrian Haak ended the weekend on a positive in third placing, whilst yesterday’s qualifying master, Will Harper ended his maiden Rotax Pro Tour weekend in fourth spot.

Harry Arnett converted a pole position yesterday into a dominant performance taking out Micro Max by over 6.4 seconds. Another Shamick Racing driver, he took off at the front and was never headed – a repeat of every race of the weekend. He led home Macka Hazard and Bradley Majman.

The Rotax Pro Tour next fires into life over the weekend of March 10-12 at Adelaide’s Bolivar Raceway as the race towards the World Finals in November continues.

For all the information and up to date Rotax Rankings points, head to www.rotax.com.au