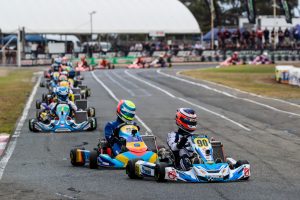 The first visit by the SP Tools Australian Kart Championship to Adelaide’s Bolivar Raceway in seven years has started in spectacular fashion with Championship implications being felt in several categories in the Championship presented by Castrol EDGE.

Championship leader, Troy Loeskow maintained his consistency and Championship lead being among the front runners. He is on target to equal Pierce Lehane as the all time Series round winner with his next victory.

There was drama late in the day in the elite Junior category – KA2 – with Championship leader Jordan Shalala denied a top three finish with a last corner crash after what’s been a difficult weekend for the Sydney-sider.

His fellow New South Welshman, Leon Cordato, has placed himself securely in the Championship winning framework, scoring maximum points through pole position and three very dominant wins. Jessie Lacey, along with Costa Toparis and Marshall Atayan have shown impressive form in day one of round three.

In other categories, X30 Series leader, Jace Matthews allowed his slender lead in the Series to be diminished after withdrawing from his last race following a mid race skirmish. 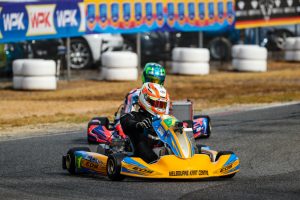 Defending X30 Champion Brad Jenner is right in the mix as is Sydney teenager, Beau Pronesti, who took a calculated heat race victory hunting down and passing 18-time Australian Champion, David Sera. Harrison Hoey took a victory, although the local crowd is cheering on a potential local victory, with Tony Kart’s Jacob Dowson ending his day with a comprehensive win.

Back to Jace Matthews though, although X30 wasn’t going his way, KA3 Senior – where he astonishingly also held the Championship lead – is looking brighter. He shared heat wins Steven Tsemelis and Benito Montalbano – the latter getting a double. Gold Coaster Matthews, in the has been consistent every time he has taken to the track, defending his comprehensive lead coming to Adelaide.

Former TaG 125 Champion, Brendan Nelson is back in the Title hunt after two race wins today in what has been an incredible day of action in TaG 125. The leader of the Series coming into this weekend, Top Gun Racing’s Cody Brewczynski set the pole and has been duking it out with Nelson and the Reuben Goodall – South Australia’s DR Kart racer has been the fly in the long time rivals’ ointment showing pace on home soil – enough to cross the line first in the final race of the day.

KA4 Title combatants, Alex Ninovic and William Newell have a set the scene for a thrilling final after sharing the three wins – Ninovic getting a double, but there is literally a struck match between the PCR chassis pilots. Queenslander Ryan McMillan and Luke Trost have also shown promise. 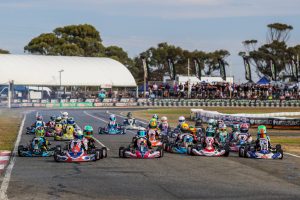 There were some hard fought battles in Cadet 12 (Pic: Pace Images)

In Cadet 12, Victorian Championship leader, Lewis Francis took two wins, and Jaxson Burns did his Title ambition no harm with two wins of his own – all four falling the way of the Parolin factory. The battle between Francis and Energy’s Ky Burke got interesting when Burke crashed amid a battle with the other top three Championship runners.

Meantime in Cadet 9 – it has been the domain of another Parolin. Sebastian Eskandari Marandi was on rails from qualifying this morning and remains on track to be undefeated this year dominating all three heats, despite the best efforts of Alaster Flack and Dominic Mercuri to take the fight to the front runner – who is aiming for four consecutive wins in Australian Kart Championship Cadet 9 competition.

More heats and finals will be conducted tomorrow at Adelaide’s Bolivar Raceway, the action starting at 8am Australian Central Time. All the action will be covered via livestream on karting.net.au and the Australian Kart Championship Facebook page.