4SS CONTINUES TO GROW ACROSS THE COUNTRY 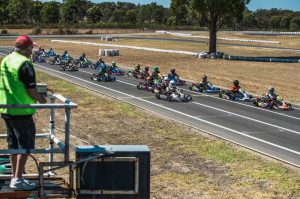 The 4SS Class continues to grow across the country

Since its introduction at the start of 2018, the 4SS class has re-invigorated the entry level of karting, and it continues to expand across the Country.

With more than 200 individual drivers taking to circuits from Wanneroo in Western Australia to Bundaberg in Queensland and numerous tracks in between.

Designed to provide a low-cost and low-maintenance opportunity for people to get involved in the sport of karting, the class is certainly hitting that mark according to Eastern Lions Kart Club President Steve Pegg.

“The introduction of the 4SS Class has been an enormous boost for our Club. It has introduced, and also re-introduced, many people back to our Club and provided a great economical way for them to get on track,” said Pegg.

“We’ve been fortunate enough to have several of our local industry members that saw the positives in the initiative from the outset and have really got behind the Class. We’re now consistently getting more than 20 4SS drivers to our Club Days.

“Some drivers have used the class as an introduction and move up into two-stroke classes, while others are more than happy just enjoying their racing in the 4SS Class. We’ve also seen a number of people come back into the sport thanks to the 4SS Class.”

Continuing on from the success of the Senior 4SS class, there has also been numerous fields of Junior 4SS drivers taking to the circuit throughout the first half of 2019.

As announced late in 2018, the Cadet 4SS Class is also beginning to shape with youngsters, and their parents, enjoying the benefits that the four-stroke engine packages provide.

The first shipment of the controlled Ricciardo 4SS Cadet Karts, that will become compulsory in the Class from July 2020, have arrived in Australia and all 20 were pre-sold and already distributed to the industry and new customers.   The controlled package is focused on low cost, simplicity and low maintenance at the grassroots level of karting.

The implementation of the controlled kart also reduces the complexity of the sport faced by newcomers at a young age. The focus will be on driver development and enjoyment of the sport of karting.