Karting Australia has released the National Calendar of Events for 2023 featuring a total of eight events across the SP Tools Australian Kart Championship, a new National Series and the Ultimate Club Racer Event.

The calendar is complimented by the third Building Better Kart Club Conference to be held on the first weekend in May.

The Australian Kart Championship is well cemented as the pinnacle of the sport in this country.  With an average of more than 300 entries for 2022, it was another record year.

Championship Regulations, that will be published shortly, will prohibit interstate competition, testing and practice at the Wanneroo venue prior to the event. In replacement, there will be an additional day of optional practice provided on the Thursday immediately prior to the round.

The Championship is scheduled to kick off at the Monarto Karting Complex, located just outside of Murray Bridge in South Australia, on March 3-5 ahead of the Western Australian sojourn.  Round Three is slated for Newcastle on June 2-4 ahead of Ipswich making a return to the schedule in mid July.

The finale will be contested at the Go-Kart Club of Victoria in Melbourne on the final weekend of August.

In line with the 2023-2030 Strategic Plan (currently in draft format), a National Series will be developed to compliment, but be substantially different in format, content and competition dates to the Australian Kart Championship.

It is intended that the National Series will be designed to maximise participation by incorporating classes that support development for the Australian Kart Championship. Initially two rounds in 2023 but with a possible third round event in early 2024 that is under consideration.

On planning the schedule for the National Events in 2023, Karting Australia has considered as many factors as possible including, but not limited to anticipated Supercars events and the FIA World Karting Championships – hence providing the opportunity for involvement in both by team personnel and competitor base. 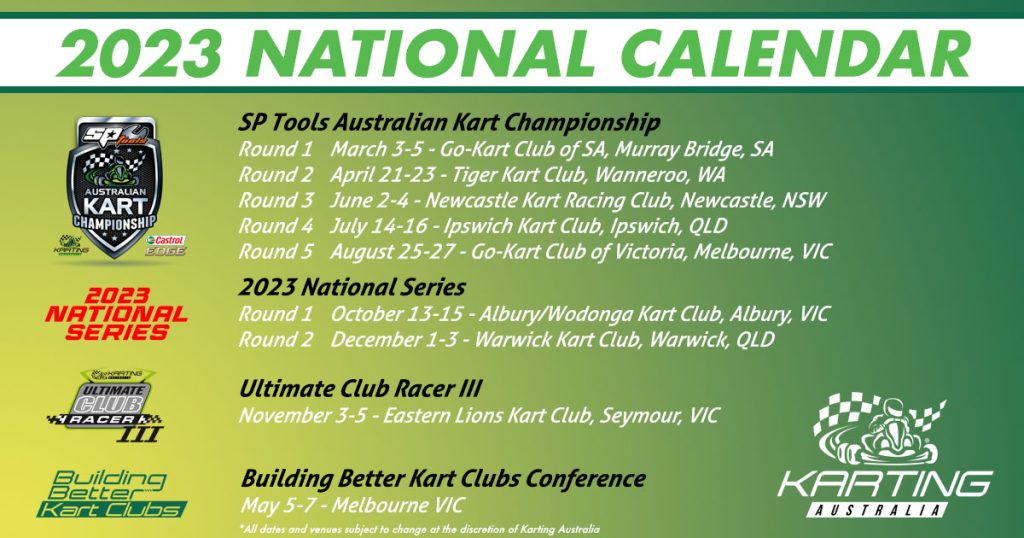