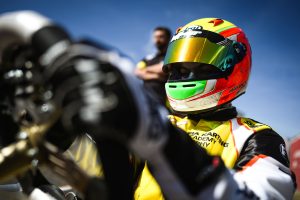 Australia’s representative in the 2022 FIA Karting Academy Trophy Harry Arnett has recorded an 18th place finish at Round Two of the Series in Cermona, Italy on Sunday.

After qualifying 18th, Arnett, a two-time Australian Champion, recorded three strong performances in his heat races – the best of which being a fifth placing in heat two – to start the 21-lap main event in 13th position.  Held in sweltering conditions, Arnett battled hard in the final before he was classified 18th in the final standings.

“It was a tough weekend here in Cremona.  I had some good heat results but unfortunately in the final had some bad luck and was at a disadvantage with my height and all the rubber that was down on the track due to the very hot conditions,” said Arnett.

“Overall I’m learning a lot with every race and it was a good weekend.  Thank you to everyone who was supporting me back at home in Australia and also to Karl Gibson as my mechanic this weekend.”
2017 Australian KZ2 Champion Josh Fife was in action in the elite KZ category with the Kart Republic factory team where he finished 22nd.  Henry Johnstone failed to make the transfer into the final of the highly-competitive KZ2 class and was classified 53rd from the 83 competitors.