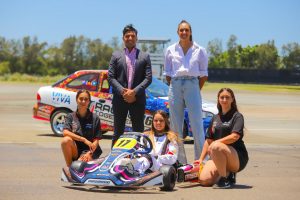 The ground-breaking Racing Together project to involve Australian Indigenous teenagers in motorsport is taking another major step forward with the launch of a new all-girl karting team.

The team of four teenage girls of Aboriginal and Torres Strait Islander background – the first of its kind – will contest a 10-event program in South-east Queensland in 2022, alongside Racing Together’s existing car-racing team.

The unique project was announced today Tokyo Olympics beach volleyball Silver medalist Taliqua Clancy, one of Australia’s most successful Indigenous female sports personalities and a Racing Together Board member.

“To create an opportunity especially for young Indigenous girls is a very exciting development in the Racing Together program,” Clancy said at the team’s Norwell Motorplex headquarters on the northern Gold Coast.

“We don’t believe anything like this has been done anywhere in the world and as an Indigenous sports person I’m delighted to give it my full support and will take a keen interest when the girls hit the track next season.”

The not-for-profit Racing Together project was founded late last year by international motorsport identities Garry and Monique Connelly, who recognised that Aboriginal and Torres Strait Islander people were virtually unrepresented in racing. Garry Connelly is Australia’s representative on the world governing body, the FIA, and Permanent Chair of the Stewards for the FIA Formula 1 World Championship.

An initial intake of six boys and four girls of high-school age has spent the 2021 season building, maintaining, preparing and racing a Hyundai Excel in the Series X3 Queensland competition at Morgan Park Raceway.

The team has attracted widespread support, including from seven-time Formula 1 World Champion Sir Lewis Hamilton, who encouraged the teenagers to follow their dreams. The Australian distributor of Shell fuels and oils, Viva Energy, has committed to a three-year program to expand Racing Together to other States.

“Despite being completely new to motor-racing at the beginning of the year, the girls have shown tremendous dedication and aptitude and have thoroughly earned this new opportunity,” he said.
“Karlai has just turned 15. The karting will prepare her for car-racing and we intend for her to race a second Hyundai during next year.
“We’ll hold an open day next February to recruit some new team members – hopefully including another female driver for 2023 – and continue the growth of Racing Together.”

Racing Together is based at Norwell Motorplex and is supported by local Indigenous Group Gunya Meta and Motorsport Australia.