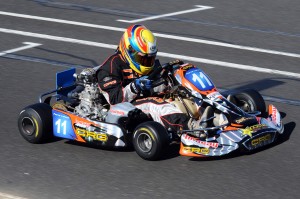 Pierce Lehane on his way to victory in the 2010 CIK Stars of Karting Series. Pic: KartX/Budd

After getting a taste of the big time in European karting at the WSK Nations Cup in Italy on the weekend, CIK Stars of Karting Series Pro Junior (KF3) Champion Pierce Lehane is thirsty for more.

The speed shown by the Sydney teenager, along with his third placing in the Rotax Max Challenge World Final the previous weekend, impressed the European bosses to now have him looking at overseas opportunities for next year and follow in the footsteps of Australians James Courtney and Ryan Briscoe, who spent much of their teenage years racing karts in Europe.

Courtney and Briscoe both made a significant impact on the European karting scene during their formative years. Courtney, a two-time world karting champion, rates the lessons he learnt during his European karting days as some of the most valuable in his entire career.

On route to winning his first title in 1995 Courtney defeated the likes of Formula One star Jarno Trulli before going on to become a Formula One test driver himself. He has since returned home to Australia where he currently leads the V8 Supercar Championship.

“The past two weeks have been an amazing experience and have made me want to race at the top level of karting in the world more often,” said Lehane, who turned 15 yesterday.

“I’ve read and heard a lot about what James and Ryan did over here during their careers but this is the first time that I have had the opportunity to come over here and experience the European racing for myself.

“To mix it inside the top five fastest junior drivers in the world is something that I’m very proud of and hopefully opened some eyes for opportunities in 2011.”

The 14 year-old qualified sixth fastest on Friday before running strongly during his heat races to secure fourth place on the grid for the pre-final. Unfortunately, a fuel issue caused a misfire in his engine dropping him to 17th at the finish of the pre-final meaning started from the ninth row of the grid for the final.

After charging his way forward during the early laps Lehane was involved in an incident on lap 6 of the 16 lap encounter which damaged his kart forcing him onto the sidelines.

“It was a bit of a disappointing way to end the trip but there’s no way I’m letting it get me down as I’m very happy with the overall trip,” said Lehane.

“The racing over here is very hard, tough and aggressive but I now know that I can be amongst the world’s best and with some financial backing can prove that Australia really has got some of the best young drivers in the world.”

Lehane was supported in his campaign at the WSK Nations Cup by the Australian Karting Association as a result of winning the CIK Stars of Karting Series this year.

Also competing at the WSK Nations Cup was Sunshine Coast racer Kyle Ensbey in the KZ2 Gearbox category. He finished 18th in the highly competitive field.

Lehane and Ensbey will jet back into Australia next week with the opening round of the 2011 CIK Stars of Karting Series being contested at Ipswich, Queensland on February 26/27, 2011.